MythologyDiscover the captivating beliefs of the ancient Greeks, Egyptians, and Vikings in this book on Mythology that contains three manuscripts. The first manuscript in this bundle is the bestseller called Greek Mythology: A Captivating… 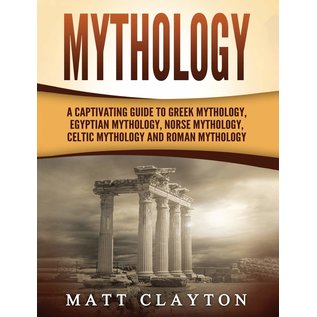 MythologyDiscover the captivating beliefs of the ancient Greeks, Egyptians, and Vikings in this book on Mythology that contains three manuscripts. The first manuscript in this bundle is the bestseller called Greek Mythology: A Captivating Guide to the Ancient Gods, Goddesses, Heroes, and Monsters.Manuscript 1: Greek Mythology: Captivating Stories of the Ancient Gods, Goddesses, Heroes, and MonstersBy the time you are finished with this part, you will have a good appreciation for the nature of Greek mythology and the gods, monsters, and heroes which populate it.Just some of the topics covered in this part include: Uranus: Betrayal by Cronus Cronus: Fear of His Children Titans vs. Olympian Gods Olympian Rule Zeus and His Ladies Prometheus and Herakles An Unhappy Tale of the Underworld The Beauty Contest that Led to the Fall of Troy Poseidon, Metis, Athena and Atlantis Kraken and Other Monsters Jason, the Argonauts, and Medea's Dragon Menelaus, Agamemnon, and the Trojan War Solon, the Athenian Law Giver 300 Spartans Socrates, Plato, and Aristotle Alexander the Great Manuscript 2: Egyptian Mythology: Captivating Stories of the Gods, Goddesses, Monsters and Mortals This manuscript is broken into three parts: Fantastic Images--Ancient Egyptian myths and legends as we know them today. Factual History--Covering pre-history through classical antiquity. Unraveling Myth--Looking at Egyptian mythology from a fresh perspective. This part is jam-packed with fascinating facts and stories. For instance, it covers perhaps the most popular of all the Egyptian stories - the myth of Osiris. Pieces of this story have been found throughout Egypt. One of the most appealing aspects of the Osiris myth is the human-like behavior of the gods within the story. Many of the other gods of the Egyptian pantheon were rather emotionless and their stories far less interesting. With the Osiris story, the gods display a broad range of emotions that made them more real to mere mortals. Just some of the questions and topics covered in this manuscript on Egyptian Mythology include: Egypt in Context Creation Fall of Humanity Osiris Myth Chief Gods of the Egyptian Pantheon Lesser Known Pantheon Ancient Egyptian History Manuscript 3: Norse Mythology: Captivating Stories of the Gods, Sagas, and Heroes Within this part, you'll find the answers to these questions and more. Just some of the questions and topics covered include: Norse Creation Story The Nine Realms Gods and the "Giants" of Jötunheim Midgard and the Humans Elves, Dwarves, Trolls and Valkyries Odin, Frigg, Thor, and Loki The Death of Baldr Conflict Between the Realms English Days of the Week And more! Buy this magnificent mythology book now to learn more about greek mythology, egyptian mythology and norse mythology