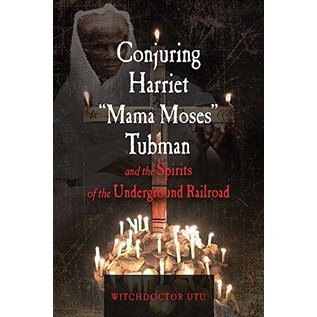 The spirits of Harriet Tubman, John Brown, and other heroes of the Underground Railroad guide readers on a magical path to healing, empowerment, and liberation.The historical role that magic and soothsaying played in the Underground Railroad has long been ignored out of fear it might diminish the legacy of Harriet Tubman and other heroes of that time. However, Harriet Tubman was a Conjure woman who relied on her dreams and visionary experiences to lead her followers to freedom. Revered as "Mama Moses," she, along with John Brown, Mary Ellen Pleasant, and others have been venerated since their deaths. They now have emerged in the 21st century as the pantheon of a new and increasingly popular African-Diaspora tradition.Written by Witchdoctor Utu, founder of the Niagara Voodoo Shrine, this is the first book devoted to the spiritual and magical tradition of the Underground Railroad. In it, the author conjures the spirits of the Underground Railroad, their continued connection to each other, and their "tracks" still leading to freedom from obstacles, bondage, and trouble and tribulations of all kinds. It is a spiritual tradition that is broadly accessible and inclusive, much like the historical Underground Railroad itself, whose participants were black, white, and Native American, male and female, Christians, Jews, Quakers, animists, secret devotees of forbidden African religions, and free thinkers of all kinds.This revelatory book teaches readers how to invoke the blessings of Mama Moses and her followers, access their healing inspiration and magic powers, and seek their own path to freedom.