She is the goddess of luck, fertility, agriculture, and a blessing giver in Sсаndinavian mythoІоgy. She is the goddess and patroness of virginity, to which all deceased virgins go. She is as pure as the morning dew.

In her name Gefjon, there is the Nor 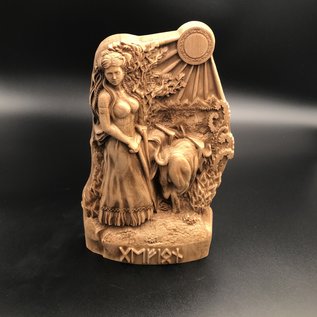 She is the goddess of luck, fertility, agriculture, and a blessing giver in Sсаndinavian mytholоgy. She is the goddess and patroness of virginity, to which all deceased virgins go. She is as pure as the morning dew.

In her name Gefjon, there is the Nordic word for “geben” (“to give”), which is why she is also referred to as "generously giving" or bringing good luck.

She is the first mother of Denmark, from whom the royal Danish family emerged.
She was very wise. Like Odіn, she knows the fate of the world.

Above all, the following story has entered the myths of her, which is described in detail in the Gylfaginning (Gylfi's deception), a main part of the prosaic Snorra Edda.

When the tribe of the Asis moved north in search of land, she preceded them and so they came to the kingdom of King Gylfi (the country that is now Sweden).

Disguised as a beggar, she delighted or enchanted the king with her song and he promised her as much land as she could plow in one day and one night. She then turned her four giant sons into oxen and plowed a huge part of Sweden in this way.

The plow to which the four giant oxen were harnessed dug itself so deep that the country broke away from Sweden, whereupon the oxen pulled it away through the sea to the south, where it became the Danish island of “Zealand”. In Sweden, what remained of the torn land was a large lake, Lake Mälaren, whose bays fit exactly with the foothills of the island of Zealand.

A tremendous earthquake may have been described in the myths, so powerful that it could only be ascribed to the deed of a goddess and her huge sons.
That is why shi is regarded as the protector of Denmark and especially as the protector of all plowing farmers.