A detailed guide to the three successive initiatic archetypes: Craftsman, Warrior, and Magician… 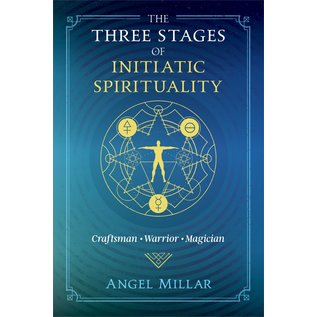 A detailed guide to the three successive initiatic archetypes: Craftsman, Warrior, and Magician

• Investigates the symbolism, rituals, and metaphysical aspects of each initiatic archetype, from the alchemy and shamanism of the craftsman, to the subtle energy work of the warrior, to the sex magic practices and Higher Self work of the magician

• Shares meditations, practices, and transformational techniques for each archetype

• Investigates the similarities between contemporary Western occultism, from Crowley to Chaos Magic, and the "positive thinking" mind metaphysics movement

Exploring the craftsman, warrior, and magician archetypes—three vocations that echo the traditional tripartite division of society—Angel Millar reveals how these archetypes represent the three successive stages of spiritual growth in an individual's life. He shows how they provide structure for the initiatory process to develop one's mental, physical, and spiritual potential. As craftsman, the individual experiences "mnemonic" initiation: the cultivation of memory as well as language. As warrior, "somatic" initiation: development of the physical body and cultivation of the spirit body. And as magician, "gnostic" initiation: cultivation of the self and manifestation of the Higher Self. Investigating the metaphysical aspects of each archetype, the author explores their symbolism, spiritual practices, and rituals. Examining the craftsman archetype, he looks at metallurgy, alchemy, and the "Craft" of Freemasonry, as well as the ancient role of blacksmith as shaman. He explores the idea of God as a "Creator" or "Craftsman," especially in relation to ancient Greek philosophy, Islamic neoplatonism, and the Kabbalah. Examining the warrior archetype, he reveals how the way of the warrior was affected by religion and mysticism, such as how the Persian martial art of Zoorkhaneh was profoundly shaped by Sufism and why the Buddhist Shaolin temple became synonymous with Kung Fu. The author places special emphasis on the cultivation of subtle energy as practiced in martial arts, especially in relation to Taoist inner alchemy. Examining the magician archetype, he reveals how each individual has two "selves"—a lower self and a Higher Self—and explores the union of opposites studied by the magician, such as in the tantric arts and sacred sex magic. Sharing meditations, practices, and processes associated with each archetype, as well as techniques for transforming one's consciousness, he also investigates similarities between contemporary Western occultism, from Crowley to Chaos Magic, and the "positive thinking" mind metaphysics movement. Structured to parallel the three archetypal stages of the initiatic process, this comprehensive guide offers a literary initiation through three degrees of esoteric knowledge.