The Soul of Ancient Egypt: Restoring the Spiritual Engine of the World - by Robert Bauval and Ahmed Osman

Home / The Soul of Ancient Egypt: Restoring the Spiritual Engine of the World - by Robert Bauval and Ahmed Osman 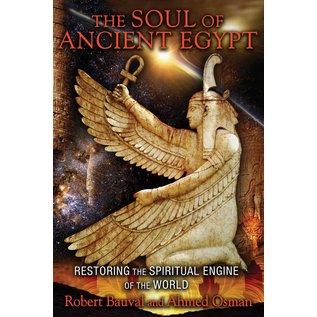 • Examines each phase of Egyptian history from the Pharaonic period, through the Roman conquest, to the ongoing Islamization

• Provides a revised portrait of the life of Muhammad, revealing his connections to the Essene tradition

Imagine the paradise of ancient Egypt: a lush green valley with a gentle river, full of animals and birds of all sizes. The first settlers, arriving by way of the desert, would have marveled at this beautiful landscape. This awe held on through the first three millennia of settlement in Egypt. Centered on careful observations of the natural rhythms of their environment, particularly the Nile, this enlightened civilization lived in a state of spiritual balance and harmony they called “living in Maat.” This state was further enhanced by the sacred landscape of Egypt and the colossal monuments and pyramids the Egyptians built to reflect the heavens, thus creating a cosmic “spiritual engine” for the ancient world. But sadly, the paradise and Maat of ancient Egypt were not to last, and for the past two thousand years Egypt has experienced many occupations by hostile forces bent on taking control of this magical land.

Exploring the exemplary social and cultural model that produced the golden civilization of ancient Egypt as well as the many waves of conquest and destruction up to the present day, Robert Bauval and Ahmed Osman examine each phase of Egyptian history from its origins and the Pharaonic period, through the Roman conquest and its Christianization, to the Pan-Arabization of Nasser and the ongoing Islamization that began with the Muslim caliphate in the 7th century. They show how the current Islamic rulers are actively working to eradicate all traces of Egypt’s spiritual roots, the source of the Western Mystery tradition. They provide a revised portrait of the life of Muhammad, revealing his connections to the Essene tradition, and explain how most Sharia Law is not based on the Koran.

Revealing how even the dams built on the Nile are impeding Egypt’s sacred role, the authors sound the call for a return to the original tenets of Egyptian civilization, one that sustained itself in harmony and peaceful creativity for more than three millennia.