The Seven Names of Lamastu: A Journey through Mesopotamian Magick and Beyond - by Jan Fries

Home / The Seven Names of Lamastu: A Journey through Mesopotamian Magick and Beyond - by Jan Fries

The Seven Names of Lamastu is an exploration of the religions and mysteries of the cradle of civilisation, Mesopotamia by Jan Fries, author of KƒÅlƒ´ Kaula and Dragon Bones. The Sumerians developed the first functional script (3500-3200 BC),… 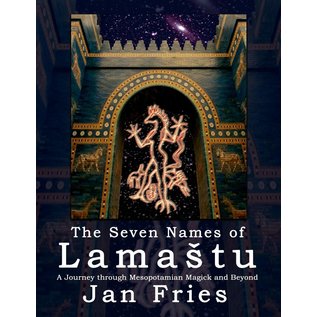 The Seven Names of Lamastu is an exploration of the religions and mysteries of the cradle of civilisation, Mesopotamia by Jan Fries, author of KƒÅlƒ´ Kaula and Dragon Bones. The Sumerians developed the first functional script (3500-3200 BC), the priests wrote god lists, dictionaries, catalogues, recorded spells, myth and poetry – and committed the first known medical prescriptions and rituals into writing. In the centre of their faith lurks the lustful animal-headed goddess DIM.ME/Lama≈°tu , exiled from Heaven for her forbidden desires, and charged by the council of Gods with a fearsome task: to cull the vulnerable and keep the human population within manageable limits. For all but a few, her name conjured terror in the hearts of Mesopotamians.Jan Fries seeks to redress the balance, by showing that this rebellious goddess, so demonized by superstitious folk and modern academics, is an essential expression of the divine. Lama≈°tu’s numerous, but rarely discussed, positive attributes bring her into focus. She is a victorious goddess, who listens to prayers, haunts both swamps and the mountain forests she loves, banishes lethal spirits, helps with the birth of wild animals and adopts stray piglets and puppies. She is a sacred woman, a priestess and a midwife to her brothers, the gods.This is a modern translation of the famous Lama≈°tu Series, with commentary, which can be used as a dictionary and travel companion through the earliest form of religion and sorcery. It is a journey that takes us through the rise and fall of empires, the changing status of women, Sacred Marriage, everyday rituals, sacrifice, divination, ritual training, conjuration, banishment, vengeful magic, spells and counterspells, dream-magic, the dawn of science, medicine and ritual music – with teachings on how to build your own civilisation using only rivers, reeds and clay. Lama≈°tu takes us from a lion-headed Stone-Age statuette in Central Europe all the way to China. Identified with the goddesses Lilƒ´tu and Ardat Lilî by the end of the second millennia, she emerges in medieval Spain as the modern Lilith. In the Arabian desert her counterpart is the dreaded ·∏≤arƒ´na, in ancient Greece, she becomes the Lamia. She inspired the artwork of the Gorgo Medusa, connects with hundreds of terrifying and deadly “mothers” in India, and becomes the dreaded Albasti/Lobasta in Turkey and China. In China, she is closely related to the tiger-fanged Daoist goddess Xiwangmu, the goddess Guimu (Mother of Ghosts) and the Buddhist deity Harirƒ´.The book concludes with the mysteries, meditations and practical rituals of Si·πÅhamukhƒÅ, the Lion-headed Goddess of Hindu and Buddhist Tantra, and a set of innovative, syncretistic meditations and trances based on the Seven Names of Lama≈°tu.Child of Heaven. Watchful One of the Gods of the Streets. Decapitator. Fire-Starter. Wild-Countenance. Trusted. Oathbound, Free to Fly.Seven names of an ancient goddess. Seven names to remember. "Sometimes, what appears to be horrible has a valid and divine function in the world. Lama≈°tu is an exalted goddess, a victorious lady, a ruler of mankind, and performs the tasks given to her by the assembly of the gods. Most of her errands may seem savage, but the Mesopotamians were aware that they had to be done." - Jan Fries