The Kabbalah of the Soul: The Transformative Psychology and Practices of Jewish Mysticism (Original) - by Leonora Leet

Home / The Kabbalah of the Soul: The Transformative Psychology and Practices of Jewish Mysticism (Original) - by Leonora Leet

Reveals the transformative spiritual work by which the soul can reach ever higher dimensions of consciousness.… 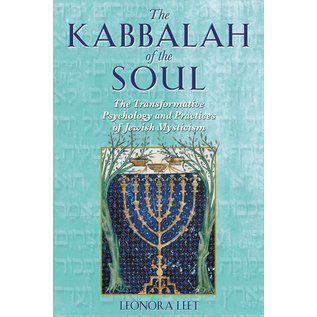 Reveals the transformative spiritual work by which the soul can reach ever higher dimensions of consciousness.

• Relates the soul levels of the Zohar to the various paths the soul may travel toward ultimate realization.

Throughout the history of the Jewish esoteric tradition, humankind has been understood to play a pivotal role in the perfection of the cosmos, uniting the finite with the infinite in the perfection of divine personality. Working from an original synthesis of the major kabbalistic traditions of cosmology derived from the Bible, the Zohar, and the school of Isaac Luria, Leonora Leet has erected a new framework for understanding the mechanism of the transformative spiritual work that enables the human soul to reach increasingly higher dimensions of consciousness. This analysis extends the frontiers of Leet’s prior works on the Kabbalah to provide a new illumination of human possibilities. Leet first considers the false temptations of worldly power and pleasure that lead to the fall of the soul and then the means of its redemption. She develops a powerful meditative technique called "the Transformative Moment," whose workings are exemplified by Jacob and Joseph and that allow the individual to progress through all the higher levels of the soul, even possibly to attain the miraculous powers of the legendary spiritual masters. She further correlates the hierarchy of soul levels with Ezekiel's Throne vision to show the various paths the soul may travel toward self-realization: sex, love, power, knowledge, holiness, and unification. The first four paths relate to the four-faced living creatures (Chayot) of Ezekiel's Throne vision—the bull-ox, lion, eagle, and man. The final two paths correlate to the prophet and the envisioned man on the throne he recognizes to be his divine higher self, the knowledge that defines the secret doctrine of the whole of the Jewish mystical tradition culminating in the Kabbalah.