The Cobra Goddess & the Chaos Serpent: in Ancient Egypt (Snake and Serpent Mythology) - by Lesley Jackson

The Serpent encircles all that is. Present before the beginning, serpents will outlast the end. Serpents are always present on our journey should we choose to see them. "Watch over the Soul! Be helpful, O Fiery One." - Lesley Jackson The… 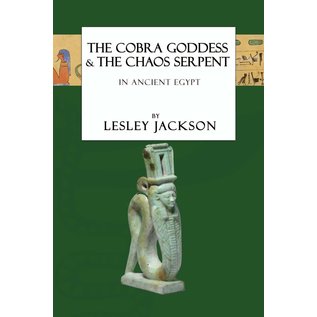 The Serpent encircles all that is. Present before the beginning, serpents will outlast the end. Serpents are always present on our journey should we choose to see them. "Watch over the Soul! Be helpful, O Fiery One." - Lesley Jackson The Cobra Goddess and the Chaos Serpent is a meticulous study of the history, mythology, symbolism and importance of snake and serpent deities in Ancient Egypt. Lesley Jackson draws on extensive research from a wide variety of sources, including the latest reports and studies of Egyptologists, taking readers on an adventurous discovery of the serpentine powers and mysteries in all aspects of Egyptian religion - including the divine, earthly and afterlife. Serpents are part of the eternal cycle of existence and the perfect symbols for the Egyptian concepts of both linear and circular time, Djet and Neheh. The Uraeus is a depiction of an Egyptian Cobra rearing forward in a warning pose showing that it perceives a threat. The Uraeus Goddess was the ultimate protector of Egyptian deities and royals, and depicted on their crowns as well as on the solar disc. The Uraeus, like the sun and the snake, was life-giving and life-taking, but regardless of her dangerous powers and fiery nature, she was never demonised. The association of goddesses such as Hathor, Isis, Sekhmet and Mut, and other Cobra Goddesses such as Wadjet and Renenutet with serpents are all explored. In the Khonsu Cosmogony, the original Creator God is the serpent Kematef who emerges spontaneously from the nun, the primordial ocean of undifferentiated potential and chaos. From Kematef comes Ptah, the Creator God; Khepri, the Sun God in his dawn aspect; and the Ogdoad, the eight primitive deities who continue the work of creation. The arch-fiend and sun-stealing Chaos Serpent Apophis (Apep) also emerged from the nun as the ultimate destructive force in the universe. Apophis represents total disorder in the perpetual battle of good against evil. Every night Apophis attacks the Sun God Ra in an attempt to destroy the sun and obliterate the Solar Barque - and with it time and space. For anyone who wants to explore the Cobra Goddess, the Chaos Serpent or the role of snakes in Ancient Egyptian magic, healing and the afterlife, this book is essential reading. "'The beginning is light, the end is Unified Darkness.' As well as being a symbol of time the snake can also be associated with the cosmic collapse of the universe which will bring about the end or suspension of time. One suggestion is that the imagery came from the way the snake periodically sheds its skin. Nothing created will survive forever but the creative principle can endure" - author Lesley Jackson