The Book of Primal Signs: The High Magic of Symbols - by Nigel Pennick

Home / The Book of Primal Signs: The High Magic of Symbols - by Nigel Pennick 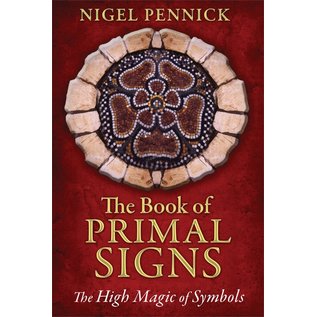 • Explains the multiple forms and uses of symbols from ancient times to the present day, reflecting their roots in folk magic and the Western Mystery tradition

• Examines more than 40 glyphs, such as the cross, fleur de lis, and pentagram, as well as several families of symbols, such as craftsmen’s marks and runes

From ancient rock and cave art to the contemporary brand logos of politics and business, human beings have always created symbols to denote specific ideas, groups, or important objects as well as to convey deeper information than can be communicated in words. Many glyphs have retained their meanings over millennia whereas some have modern meanings vastly different from the original connotation. In this study of symbols, Nigel Pennick explores glyphs as agents of higher consciousness and ports of access to the collective unconscious, acknowledging the continuity of tradition, both deliberate and not, as well as how interpretations of some symbols, such as the swastika, have changed dramatically.

With more than 300 unique woodcuts, drawings, calligraphy, and photographs--many never before reproduced--Pennick examines ancient and enduring glyphs in detail, such as the circle, cross, eye, pentagram, fleur de lis, tree of life, and horseshoe, as well as several families of symbols, such as craftsmen’s marks, runes, symbolic beasts, human heads and skulls, and the sigils of Mammon. The author explains the multiple forms and uses of each from ancient times to the present day, reflecting their roots in the Western Mystery tradition. He explores the symbols of high magic such as the glyph of John Dee’s monad, those of folk magic such as the traditional cock on the weather vane, and the creation of modern glyphs such as the peace sign and the anarchy symbol.

Contrasting the hi-jacked use of power symbols in modern advertising with the vital role of symbols in traditional arts and crafts, Pennick reveals how symbols link the cosmic with the terrestrial and allow us to infuse the mundane with the numinous.