Teachings of the Santería Gods: The Spirit of the Odu - by Ócha'Ni Lele

Home / Teachings of the Santería Gods: The Spirit of the Odu - by Ócha'Ni Lele

The first book to explore the sacred myths of Santería… 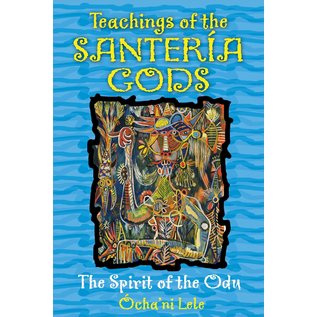 The first book to explore the sacred myths of Santería

• Includes more than 100 myths, stories, and histories about the odu and the orishas

• Reassembles the oral fragments from the African diaspora into coherent stories

• Demonstrates that the African peoples, specifically the Yoruba, were deeply spiritual

At the core of the diloggún—the sacred divination system of Santería—are the sacred stories known as the patakís, narratives whose themes are as powerful and relevant today as they were in the minds of the ancient Yoruba who safeguarded them. Each patakí is connected to one or more of the 16 odu, the principal creative forces of Santería. Some recount the lives of orishas on earth, others the lives of individuals in heaven, and some tell of the odu themselves, for even they once walked the earth as mortals. The first book to explore these ancient African stories in English, Teachings of the Santería Gods recounts more than 100 of these sacred parables, including many stories reassembled from the oral tradition of the African diaspora. Ranging from creation myths to what happens when a love potion works far too well, these stories share the wisdom and spirituality of the Yoruba people of ancient Africa and form the living, oral bible of one of the world’s fastest-growing faiths.