The Origins of Psychic Phenomena: Poltergeists, Incubi, Succubi, and the Unconscious Mind - by Stan Gooch

Home / The Origins of Psychic Phenomena: Poltergeists, Incubi, Succubi, and the Unconscious Mind - by Stan Gooch 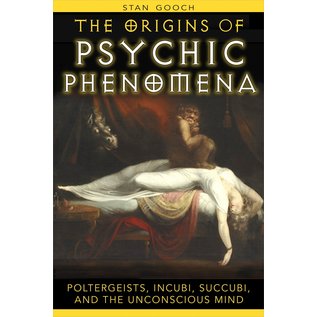 • Shows how the cerebellum—the seat of the unconscious—is the source of these energies, subpersonalities, and manifestations

Alien abduction, poltergeist attacks, incubi, succubi, split and multiple personalities, possessions, precognition, spontaneous combustion—the list of phenomena not just unexplained but ignored by mainstream science seems endless. Yet the key to the origin of all these manifestations lies deep within our own brains. In The Origins of Psychic Phenomena, Stan Gooch explores the functioning of the dream-producing part of the brain—the cerebellum—and how the unconscious mind is able to externalize itself. The cerebellum is the physical seat of the unconscious and was once equal to or even superior to the cerebrum as essential to our functioning. In modern times it has been shunted into the subliminal, yet the cerebellum continues to process our worldly experiences and reveals its concerns in misunderstood, often frightening, manifestations. Gooch explains that Neanderthal Man possessed a much larger cerebellum than Cro-Magnon Man and posits that the modern repression of the cerebellum’s role in our consciousness has given rise to these supernatural phenomena.