"This new and valuable book delves into the 'interior' experience of voodoo, as opposed to the usual outsider focus on ritual and cosmology. In telling the story of her own initiation and painstaking education in voodoo, Beaubrun takes us… 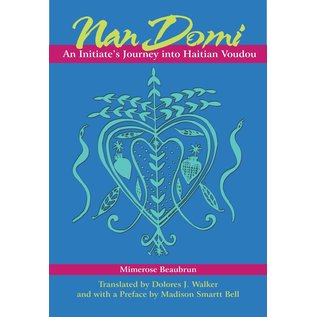 "This new and valuable book delves into the 'interior' experience of voodoo, as opposed to the usual outsider focus on ritual and cosmology. In telling the story of her own initiation and painstaking education in voodoo, Beaubrun takes us into the mystical dimensions of this ancient religion."—The Guardian UKLike all the great religions Vodou has an external, public practice of rituals and ceremonies—and also an internal, mystical dimension. Before Nan Dòmi, works about Vodou have concentrated on the spectacular outward manifestations of Vodou observance—hypnotic drumming and chanting, frenetic dancing, fits of spirit possession. But practically all reports on Vodou are outsider accounts, which means that they are stopped at the threshold.Mimerose Beaubrun, educated as an anthropologist, set out to write another such work, but in the process she met the woman who would become her ultimate teacher and guide to the religion's internal mysteries: Tante Tansia, whose knowledge, wisdom and spiritual power govern the text of Nan Dòmi.Nan Dòmi is the only account of Vodou's private, mystical, interior practice that has been offered to the public so far. Its content stands in the same relation to ceremonial Vodou as Zen to conventional Buddhism, Sufism to conventional Islam, the practice of the desert saints to conventional Christianity. Mimerose Beaubrun has been a student of Vodou for half of her life, but she is also an adept, and in this uniquely valuable work, she divests herself of all scholarly apparatus to speak from Vodou's purest heart.This English edition includes a fascinating introduction by Madison Smartt Bell, placing the religion and Beaubrun's memoir in historical context.Praise for Nan Dòmi:"Mimerose Beaubrun's book Nan Dòmi: An Initiate's Journey into Haitian Vodou — the first part of the title refers to a spiritual state — is a welcome addition to the canon of vodou scholarship, a deeply felt inside account of a faith of often daunting complexity."—The Miami Herald"Nan Dòmi is a fascinating look inside the Haitian Vodou religion. Mimerose Beaubrun provides a valuable contribution taking us along into the world of Nan Dòmi, a dream state and stage in the initiate's journey to mastery … In the process the reader is introduced into a world that is far more than a religious tradition. Haitian Vodou is also a way of speaking about Haiti, as Beaubrun explains, 'its language, culture, even its way of walking, of preparing food, of dressing, of making love, of communicating with unknown worlds.' The book casts its spell on the reader who persists in the journey under the tutelage of Beaubrun and her teachers. Madison Smartt Bell's excellent introduction places the religion and Beaubrun's memoir in historical context."—Julia Alvarez"Vodou is one of the most valuable—and misunderstood—of all New World cultural creations. Mimerose Beaubrun's remarkable work opens up for the first time the internal world of Vodou, and what emerges is a singular engagement with a system of belief that cannot fail to impress any reader with its sheer sophistication and complexity. Gradually, the author recounts the ways in which she came to know the timeless wisdom of Vodou. Absolutely essential reading for anyone interested in Haiti, or in religion and society more broadly." —Martin Munro, author and editor of Haiti Rising: Haitian History, Culture and the Earthquake of 2010