Forbidden Rites: A Necromancer's Manual of the Fifteenth Century - by Richard Kieckhefer

Home / Forbidden Rites: A Necromancer's Manual of the Fifteenth Century - by Richard Kieckhefer 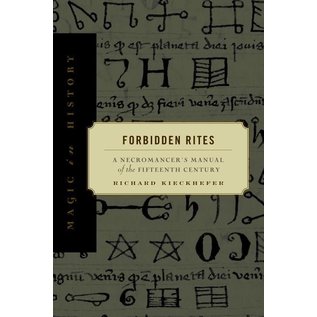 A general introduction to medieval magic, containing a little-known handbook from the late Middle Ages. 'Forbidden Rites is the best book on magic in the late Middle Ages and a great introduction to the problematic relations of magic and religion in general.' H. C. Erik Midelfort, University of Virginia Preserved in the Bavarian State Library in Munich is a manuscript that few scholars have noticed and that no one in modern times has treated with the seriousness it deserves. Forbidden Rites consists of an edition of this medieval Latin text with a full commentary, including detailed analysis of the text and its contents, discussion of the historical context, translation of representative sections of the text, and comparison with other necromantic texts of the late Middle Ages. The result is the most vivid and readable introduction to medieval magic now available. Like many medieval texts for the use of magicians, this handbook is a miscellany rather than a systematic treatise. It is exceptional, however, in the scope and variety of its contents prayers and conjurations, rituals of sympathetic magic, procedures involving astral magic, a catalogue of spirits, lengthy ceremonies for consecrating a book of magic, and other materials. With more detail on particular experiments than the famous thirteenth-century Picatrix and more variety than the Thesaurus Necromatiae ascribed to Roger Bacon, the manual is one of the most interesting and important manuscripts of medieval magic that has yet come to light.