Within the extant corpus of Hellenistic literature, there are a small number of attestations of a curious term: θεαγωγία (divine evocation). The use of the terms 'evocation' and 'invocation' within contemporary discourses on magic exhibit… 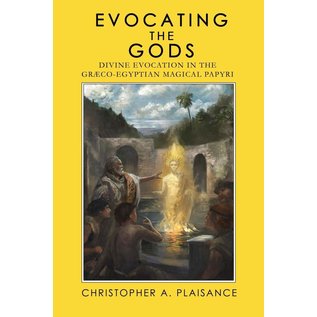 Within the extant corpus of Hellenistic literature, there are a small number of attestations of a curious term: θεαγωγία (divine evocation). The use of the terms 'evocation' and 'invocation' within contemporary discourses on magic exhibit clear technical distinctions - with invocation being an activity proper to the supernal genera of beings occupying a higher place than the operator in the divine hierarchy (i.e. gods, angels), and evocation referring to activities proper to the infernal classes of beings beneath the operator in the hierarchy (i.e. daemons, spirits). -Christopher A. Plaisance Evocating the Gods: Divine Evocation in the Graeco-Egyptian Magical Papyri offers the first dedicated analysis of the practice and context of theagogy within the Late Antique world. This book is an in-depth exploration of the historical context of θεαγωγία (divine evocation) within the Papyri Graecæ magicæ (PGM), combined with a comprehensive examination and philological analysis of the technical terms found in the texts. Christopher A. Plaisance demonstrates that the practice of theagogy is part of a wider tradition, as well as being rooted in Western Esotericism. The PGM spells in which the magician evokes deities were controversial and ambitious even at the time when they were written down. In this monograph, the author first explores essential terminology and their definitions before presenting detailed chapters on: - Spells of Binding and Constraint - Erotic Enchantments - Psychagogy and Necromancy - Evocating the Gods Plaisance delves into the philosophical attitudes towards both theagogy and other magical practices within Middle and Late Platonism as part of this meticulous study. By drawing on a wide range of sources in the Western esoteric tradition, the author illustrates the contextual relationships between seemingly unrelated Late Antique magical practices such as theurgy, necromancy, erotic enchantments and binding curses. The exploration and philological analysis of the technical terms found in the Greek Magical Papyri, as well as the crucial differences between evocation and invocation, makes Evocating the Gods essential reading for all students of the Græco-Egyptian Magical Papyri. About the Author Christopher A. Plaisance is an independent humanities scholar researching topics within the fields of the history of philosophy, religion, and Western esotericism, from the methodological perspectives of classical philology and discursive archaeology. He holds an MA in Western Esotericism from the University of Exeter's Centre for the Study of Esotericism; and a BA in Philosophy from the American Military University. He works professionally as a cyber-threat hunter and lives in Southeastern Pennsylvania with his family.