Diloggún Tales of the Natural World: How the Moon Fooled the Sun and Other Santería Stories - by Ócha'Ni Lele

Home / Diloggún Tales of the Natural World: How the Moon Fooled the Sun and Other Santería Stories - by Ócha'Ni Lele

Sacred myths from Santería centered on nature and the natural world… 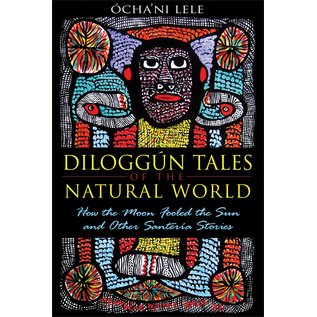 Sacred myths from Santería centered on nature and the natural world

• Includes more than 40 myths, stories, and histories from the Lucumí tradition

• Reassembles the oral fragments from the African diaspora into coherent stories

• Demonstrates that the African peoples, specifically the Yoruba, had deep philosophies and metaphysics involving nature and the natural world

Since ancient times the Yoruba of West Africa created sacred stories-- *patakís* \--to make sense of the world around them. Upon arrival in the New World, the Yoruba religion began to incorporate elements from Catholic and Native traditions, evolving into Santería, and new patakís were born, adding to the many chapters already found in the odu of the diloggun--the sacred oral teachings and divination system of the Yoruba, or Lucumí, faith. Comparable to the myths of ancient Greece and Rome and rich with jewels of wisdom like the I Ching, these Santería stories are as vast as the Hindu Vedas and as culturally significant as the parables in the Torah, Talmud, and Christian Bible.

*Diloggun Tales of the Natural World* presents more than 40 patakís that shed light upon the worldview of Santería. Each story in this collection, reassembled from the oral tradition of the African diaspora, is centered on a spiritual principle in nature: the waxing and waning of the moon, solar and lunar eclipses, the phenomenon of shooting stars, the separation of sky and earth, and the origins of the animals and birds who play key roles in Santería symbology. Revealing the metaphysics, theology, and philosophy of the Yoruba people, this volume shows these stories to be as powerful and relevant today as they were to the ancient Yoruba who once safeguarded them.