Creating Circles and Ceremonies - by Oberon and Morning Glory Zell

Creating Circles and Ceremonies is the accumulation of decades of circles, ceremonies, rituals, Mystery plays, initiations, rites of passage, and other magickal workings co-created by the Zell-Ravenhearts, today's foremost Wizard/Witch… 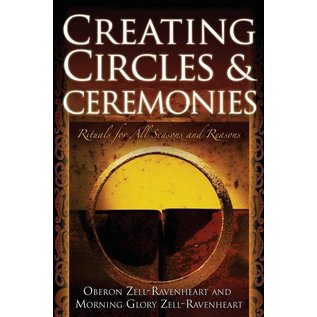 Creating Circles and Ceremonies is the accumulation of decades of circles, ceremonies, rituals, Mystery plays, initiations, rites of passage, and other magickal workings co-created by the Zell-Ravenhearts, today's foremost Wizard/Witch couple. For more than 30 years, Oberon and Morning Glory have traveled widely throughout the worldwide magickal community--participating in gatherings, conducting workshops, and creating rituals for groups large and small. They have met and made Magick with the leaders of many traditions: Celtic Shamanism, British Dianic, Italian Strega, Welsh Witchcraft, Faerie Trad, Ceremonial Magick, Ozark Druidry, the New Reformed Order of the Golden Dawn (NROOGD), Hinduism, Native American tribes, Greek and Egyptian mythology, and the futuristic Church of All Worlds.

Here, in one easy-to-read volume, is their collection of chants, invocations, circle-castings, quarter-callings, spells, and ceremonies. It is also a "kit" to use to assemble your own rituals, for any season or reason: Book I presents a basic ritual outline. Each element is followed by numerous examples which may be "plugged in" to customize your own ceremony. Book II gives numerous examples of actual ceremonies: Esbats (full Moons) and special occasions; Rites of Passage; Mysteries and Initiations; spells and consecrations. These can be adapted and modified as needed for any size group--from small family gatherings in your living room, to huge outdoor celebrations involving thousands of people. Book III provides an assortment of full rituals and ritual elements for celebrations of the eight great seasonal festivals called the Wheel of the Year. Versions of these have been commemorated for millennia in most traditional cultures of the Northern Hemisphere; and today are universal throughout the worldwide Pagan community.