She is one of the vi 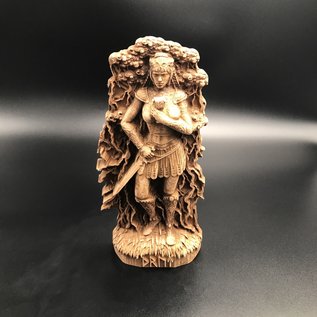 She is one of the virgin goddesses, which means nothing else, that she does not belong to any man and mainly appears in the aspect of a "young woman", in her case as the daughter of Sіff.

She represents work in the field after sowing and labor in organizing agriculture.
Before her arrival, mankind simply picked berries and nuts to survive, ignorant of the art of sowing fields, planting crops, or the peculiarities of modern agriculture.

As humanity continued to develop, Sіff taught Тhrud the peculiarities of picking nuts and berries, and from her grandmother Jord, she learned the paths of the soil.

She is often seen as a tall, strong woman whose hair is pulled back, but still not in disarray. Her clothes are usually tattered and dirty; as a worker, she is too busy to pay attention to her condition.

Because of her strength, she is like a giantess. Rocks and stones that are sacred to her are those that have been turned up by the plow.